HONG KONG SAR – Media
OutReach – 4 January 2022 – NFT & blockchain game developer HolyShxxt!! announces the upcoming launch of
a set of generative art collectibles that includes 8,888 special soccer
players’ NFTs. HolyShxxt!! promises to launch a strategic football management simulation GameFi within three
months from the day all NFTs are minted, and details will be announced on 11
January 2022. Join us and play to earn! 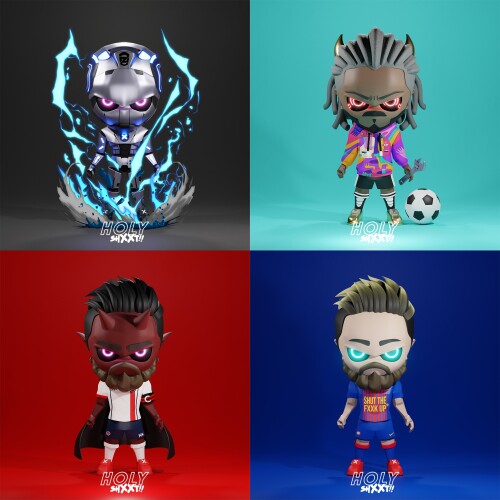 FOCUS ON NFT LONG TERM VALUE INSTEAD OF SPECULATION

HolyShxxt!! believes successful NFT should ride on good online community
management that creates long term value. Hence, HolyShxxt!! is going to launch a
play-to-earn football management simulation game for NFT holders so that all
community members can collaborate and co-create their dream team. Like the
popular “Football Manager” series, players can choose to be “Manager”
to arrange line-ups, formations, and tactics, or as “Agent” to put their NFT
players in the Club following Manager’s lead to win. Winners can earn
“Key0Coin”, the game token for subsequent rare NFT and special
merchandise transactions in the future.

Each HolyShxxt!! soccer players’ NFT is unique and is created by a combination
of 15 traits and over 480 attributes in addition to special functional features
like air jet, wings and many more surprising elements that make it more
valuable. In pre-launch stage, the
digital collectibles have received a large spotlight from the art industry and
art collectors with an invitation to the Global NFT Exhibition organised by K11
Art Mall in December 2021. HolyShxxt!! has also been referred by the Milan art
unit HOAALab to exhibit in Rome, Milan in January, followed by
exhibition invitations to Melbourne and Chongqing in the coming two
months.

HolyShxxt!! is a group
of passionate talents from diverse backgrounds and international exposure with
a shared vision, that is to excel
in game design and NFT art directions. Co-founder and 3D Artist Liz is the creator of MadBulL, a phenomenal NFT project
which is beloved by many collectors and recognised by OpenSea as one of the
blue checkmark collections. Her work is also recommended by Ali Sabet, an Iranian American artist regarded
as one of the top-selling artists in the NFT world. Founder and Art Director Rb Li added, ‘We are capable and determined to create world-class
NFT. We believe 3D art creations are more applicable in gaming and the future Metaverse
world, compared to 2D or Pixel art.’

Another
co-founder Onn is the technical architect and was the creator
of CryptoKitties game, he previously worked in a Fortune Global 500 listed
company Accenture. He is an expert in writing smart contracts and has designed
more than 10+ Dapps, mobile VR first-person shooting and mobile games since
2017.  Founder and initiator LCM believes the success of sport-related NFT
& GameFi that engage sports fans across the world can set a precedent for
sport clubs or organisations to explore using blockchain projects for fundraising
and hence benefits in long term to world sport development.

Gym Aesthetics Partners with OliveX Holdings Limited (OLX.NSX) on the NFTs in Sandbox