HONG KONG
SAR – Media OutReach –
9 February 2022 – Hong Kong’s first
NFT with football management simulation GameFi “HolyShxxt!!”, which will be opened
for public minting on 14 February, is officially collaborating with Elite Apes, an elite club of Bored Ape Yacht
Club (BAYC) owners.  Under the collaboration, the team will launch
a series of special edition Bored Ape “HolyShxxt!!” NFTs based on the
properties from the BAYC NFTs owned by its members.  Elite Apes will also take part as a strategic
advisor of “HolyShxxt!!” with a common goal to boost the development of NFT
projects in Hong Kong. 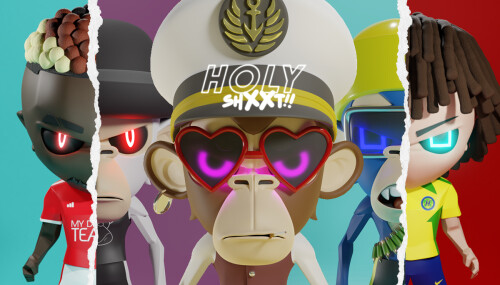 United from all walks of life, the 150 global members of Elite Apes are
enthusiasts who are passionate about NFT investment with deep insights on NFT
project development.  The accumulative
value of the members’ NFT collection is estimated at roughly USD 45 million.

“Elite Apes is dedicated in supporting NFT projects in Asia, especially those
in Hong Kong that possess of long term potential and physical utilities.  We adopt a very stringent criteria in selecting
our partnering NFT projects.  We will
evaluate them through our “CARD” standard (Community, Art, Roadmap, Developer)
to determine if they are a good project that are worth investing in,” stated
Jason, Founder and CEO of Elite Apes.

Jason added, “Before we confirm
this partnership, we have completed several rounds of assessment on the background
of the founding team, its Discord community, project roadmap, as well as the
capability of the team.  We are very glad
to tell you that ‘HolyShxxt!!’ is an outstanding project that fulfilled all
four criteria of our CARD standard.  With
thorough understanding on the market, the three founding members are dedicated
in sustaining the value of the project by bringing in new possibilities and
maintaining a healthy global community.”

Encouraging play to earn with its first rare NFT

Unlike normal NFT that can be minted with ETH, the special edition Bored
Ape “HolyShxxt!!” NFT has to be purchased with Key0Coins earned from playing
the simulation game[1]. Non-NFT
owners may also purchase the Key0Coins in the official channel which are generated
at 1:1 ratio as players earn their coins through playing game.

The team believes successful NFT should ride on good online community
management that creates long term value.
“To maintain the heat of our online community and create long term value
for ‘HolyShxxt!!’, it is important for us to keep our platform fresh and let
our NFT owners benefit from trading rare NFTs and earning ‘Key0Coin’ through
playing games.  We are thrilled to
collaborate with Elite Apes to launch our first rare NFT. We will keep looking
for meaningful collaboration and grow with our fans”, stated LCM, founder and initiator of HolyShxxt!!.

To show appreciation to their passionate fans, “HolyShxxt!!” opened up
1,000 quota among its 8,888 NFTs for Elite Mint on 23 January.  Within just one day, the quota was
oversubscribed for 50%.   What’s more, there
is only very little white list quota left for minting on 12 February, which is
now exclusive to Elite members only.  The
final 1,111 NFTs will be opened for public mint on 14 February.  For more information, please visit the
official Discord channel https://discord.gg/holyshxxtnft.

[1] “HolyShxxt!! promises to launch a strategic
football management simulation GameFi within three months from the day all NFTs
are minted.

Nasal-spraying LiveSpo NAVAX: Probiotics of the next generation for respiratory infections