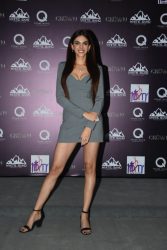 Former Miss India 2014, Aditi Vats who was last seen in ALTBalaji’s Bebaakee is all set to live her big break Bollywood dream. The actress has been roped in for an upcoming magnum opus Indian 3D film titled CROWN. It will be India’s first ever 3D woman superhero film. Aditi will be playing the main protagonist in this film.

An elated Aditi says, “I had gotten a call from Ravi Ahuja’s casting company. After giving an audition and going through the look test, when I was told that I will be doing this film, I couldn’t really believe that I will be doing such a huge project. One of its kind in India… But along with the thrill, I’m scared a bit. I’m trying my best to get into my character. I wanna be just perfect, since it’s such a big project. The entire team is so talented, I can’t wait to start shooting. Keep showering your love on me guys, you all have always made me full with your love and support… I need it now too! Also, thanking my director and producers for trusting in me for this role.”

Recently, the team disclosed the very first look of the the title of the film, and it looks vibrant in the first go. It will be shot completely in India. The project will go on the floors in January 2022.

The film will be directed by Narein Praneas Rao and produced by Abhay Kumar and Dr. Aravind K.

2021-11-19
Mahender
Previous: Male Infertility
Next: How to Boost Your Mortgage Borrowing Power