Posted by: Mahender January 19, 2023 in Entertainment 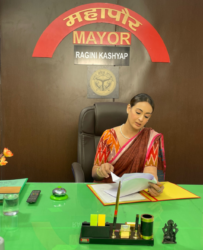 Actress Preeti Jhangiani who will be seen coming back on the Big Screen in the film Mahapaur was spotted shooting for the film in Lucknow City. Helmed by director Avinash Gupta, the film is produced by Priroda productions and Varchasv Motion pictures . Other than Preeti in the titular role as the Mayor, Ragini Kashyap,we will see actor Yajuvendra Pratap Singh , Pankhudi Gidwani and Dr Anil Rastogi also in important roles.

Talking about her role Preeti says,”A very different side of me will be seen in this film. It is a role with a lot of grey shades . I’m already working towards perfecting the accent and attitude that the character will have. We are shooting in Lucknow now and it’s turning out to be an experience of a lifetime!”

“The film shows that the Mayor plays an important part in the development of city.Along with bureaucrats and corporators the Mayor should work to keep the city clean and beautiful . But does Ragini Kashyap follow the right path? She has a rift with the municipal commissioner and along with corporators on her side creates havoc and turns the city into a nightmare..” Describes Preeti.

Mahapaur is a story of bureaucracy and politics entwined with severe environmental issues. After the love and appreciation that Preeti has always received, it will surely be a delight to see how she tackles this difficult role!