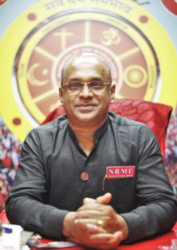 General Secretary Comrade Venu P. Nair is a man of sheer focus and dedication who has served for many years in the National Railway Majdoor Union (NRMU) (CR/KR). His interests always lie in representing and protecting the interests of the permanent and contractual workers of the Central Railway.

Being the General Secretary of the NRMU (CR/KR) brings a lot of responsibilities on his shoulders and he has never complained to take a day off when it comes to collectively organize, agitating, and negotiating to prevent exploitation of fellow workers and to save labor rights.

Such commitment demands strenuous efforts from an individual to become hope and support of so many lives. He has spent his young days doing social servicing and still continues to do the same until he sets his foot into the grave. This is what he said when interviewed.

He started from the bottom and after consolidating the strength of the union for long years has now transformed it into a largest union of central railway chosen by the workers in SBE held for recognition. However, his hard work did pay off in the end.

Talking about his overall achievements so far, he has ensured a prominent role in union activities for youth and women. He has always carried a unique vision in favor of children and women and has always stood first to be a helping hand for them.

Challenges often arise in life as well as at workplaces too. Overcoming those challenges will strengthen ones character. Venu P. Nair is also known for successfully settling innumerable staff issues and has acquired positive outcomes in the interests of employees.

Let’s see how did he respond when we asked him a few questions in one-on-one interaction.

Q. Do you think common people will take Union seriously?

A. The foundation of the society is formed by the pillars of the working class and the farmers. And I believe that unity is crucial to fighting injustice and unity is the only thing that can bring change in society. This is the awareness that I expect to be transferred to common people and they hear me out and understand my ideals.

A. Yes, why not. Interaction with people has always been important to me because it brings clarity to my character and strengthens it. Apart from this, being a Central Government employee, I am neutral in my political beliefs. Also, the NRMU (CR/KR) is a non-political organization and sees everyone equally irrespective of their position and powers.

Q. Apart from Union Activity, what else do you do in your free time?

A. First of all, I am not free as I have to deal with many issues every day. It is rare to buy some time for myself, but I do manage then read books, engage in sports or humanitarian activities to boost my thinking ability.

Q. If not Union, then what career you would have opted for?

A. It would inappropriate to call Union a career. Actually, it is calling or you can say duty which demands honesty from you at every step you take every day. I like to remain among and surrounded by people as interaction strengthens me a lot and increases my confidence that I am doing the right things in my life.

Q. How necessary are community development and education?

A. Education is something that enhances and improves an individual’s personality and makes his character strong. If you dream of seeing a developed society then education is the key to forming one in the future. Every citizen has got right to educate himself and his children. I wish to see a massive change in society before I step into my grave and I know that this is only possible with the help of education only.

2021-12-20
Mahender
Previous: Recipe : CHRISTMAS WREATHTO SHARE
Next: What Happens If Google Shuts Down For A Day?

Who’s the winner? Team Men vs. Team Women in the Teachers’ Battleground

Tips on How to Protect Crops during winter

Why You Shouldn’t Burst Firecrackers During Diwali