Posted by: Mahender January 24, 2023 in Entertainment 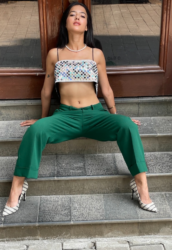 As per sources, Soundous Moufakir has signed on for an upcoming movie titled ‘Continuity’. Splitsvilla fame Soundous will be be seen as a fascinating character in the film produced by Deepak Singh. Hailing from Morocco, Soundous is making her debut through this film. She will be essaying the role of Roma in the movie which will be her first project as an actress.

She said, “It was quite a pleasant surprise when sir offered me this film, and I didn’t take a moment to say yes. I want to set a standard for myself in Continuity. It was a dream come true to see myself on the monitor with my style and attire. I’m sure people will fall in love with this character. I’m playing a punjabi girl romancing and fighting for the love of her life.”

Soundous shared various photos from the sets of the show and captioned it, saying, “Continuity, soon on your screens. ROMA, a character who’s very different from who I am. Thank you Deepak Singh for this opportunity.”

Well, we are sure that fans will be excited to see the beautiful actress in the upcoming movie, where she will be playing something different. The film is ready to be nominated for International Film festivals.

5 films for a family evening