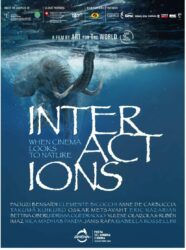 “Interdependence” and “Interactions” initiatives are two global awareness milestones where GAIL integrated It’s messaging through renowned Film makers from many nations to reach millions with one consolidated voice on climate change, environment & biodiversity produced under the auspices of organisations like United Nations, WMO, WAAS, COP15 and climate advisors.

INTERACTIONS comprises of 12 short films produced by Art for the World (Geneva, Switzerland) with the participation of 12 international film-makers. INTERDEPENDENCE, was Premiered at Rome and was viewed by over 500 million people across continents including India

To support its mission & vision statement GAIL has also initiated a path to a Net Zero GAIL alongwith a Net Zero India & a Net Zero World. For GAIL there are many milestones that need to be laid, along the path being paved for a cleaner, sustainable future and more habitable Earth.

GAIL has been constantly striving to create awareness against Climate Change, Air Pollution and spreading the tenets of Sustainability in individual and corporate lifestyles through its initiative Hawa Badlo.

Hawa Badlo (Change the Air) an initiative by GAIL (India) Ltd was started in 2016. It connects with the citizens on a digital platform for creating awareness for better air and environment and to provide solutions for curtailing the effects of air pollution was originally started as a in the year 2016.