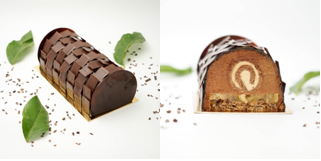 Whip the cream and keep it in the fridge.

In a bain-marie, heat the eggs and the egg yolks to 40 ° C, then whip them with a mixer.

Melt the sugar in water at 110 ° C and pour in the whipped eggs and make a bomb dough.

Whisk the hot chocolate with the whipped cream.

Add the bomb dough and mix with a spatula.

Pour 900 Gr of the preparartion per mold

The foam will diminuate of approximately 10%

Heat the milk and cream in a saucepan and add the roasted nibs.

Pass through a chinese, then reweigh and add the missing amount of liquid with cream.

Add the sugar and pectin mixture.

Mix with a whisk and bring to a boil.

Cut the lemons into slices and blanch them 3 times.

In a saucepan, put the lemon slices, the lemon juice and the 1st sugar.

Add the sugar and pectin mixture and bring to a boil.

Chop with a knife.

Bring the milk, butter and fine salt to a boil.

Add the flour and cocoa powder off the heat and mix.

Gradually add the eggs and yolks and smooth.

Whip the egg whites and tighten with the sugar.

Mix the two masses together.

Spread with an angled spatula on a silpat.

Place on the grid and cool.

Mix the cocoa nibs in a food processor.

Whip the whites with the whisk and tighten with the brown sugar.

Mix with the powders.

Sprinkle the 60 Gr of cocoa nibs on it.

Place on the grid and let cool.

Mix the water and gelatin in a bowl and refrigerate.

In a saucepan, put the caster sugar, liquid cream, glucose and water and bring to a boil.

Off the heat, add the cocoa powder, mix with a whisk and bring to a boil.

Mix with a hand blender and add the gelatin.

Pass through a chinese and store in a cool place.

Melt the chocolate in a bain-marieand temper it.

For the tips, sprinkle cocoa powderon a acetate sheet, pour chocolate, add a second acetate sheet and spread. Cut out a round 9cm in diameter and cut the base 8cm from the top.

Melt the glaze at 28°C and glaze the yule log cake.

Then arrange the rectangles in staggered rows.

Where and what to eat travelling to Tokyo, Japan?

IT’s ALL ABOUT THE STYLE, CRAFT, QUALITY OF YOUR BEER