A painting by Italian artist Leonardo da Vinci, Mona Lisa is one of the most popular works of art in the world. It is considered as a masterpiece of the Italian Renaissance. Even when the painting has been criticized for being all hype, the fact remains that it is among the most talked about and most visited painting in the world. The original Mona Lisa artwork is currently owned by the French and is displayed at the Louvre in Paris. 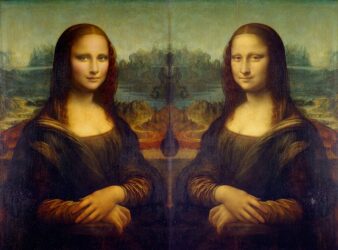 Who is Mona Lisa?  – Over the years, there have been several speculations over who actually is Mona Lisa. Was Mona Lisa a real person or just an imagination of the artist? Some theorists also suggest that Mona Lisa is a self-portrait of Leonardo, albeit in feminine form.

However, as of now, most experts agree that Mona Lisa represents Lisa Gherardini del Giocondo, who was wife of Francesco del Giocondo, a Florentine silk merchant. Even then, conspiracy theories abound about the real identity of Mona Lisa.

Hidden initials – Artists usually sign their paintings, but this was not the case with Mona Lisa. This again led to various types of speculations. Once there was a claim that the initials L and V could be seen in the eyes of Mona Lisa. However, closer inspection revealed that the initials were just microscopic cracks formed on the paint.

Mysterious background – The vista painted behind Mona Lisa seems quite unrealistic. It’s a mix of various objects including a bridge. The landscape seems different on either side of Mona Lisa. The landscape on the left seems lower in comparison to the landscape painted on the right. Could the terra firma be actually from another planet? Many conspiracy theorists certainly believe so.

A live smiling face – Mona Lisa’s smile is one of the most studied subjects. If you look at the picture, you get a sense of the smile broadening. It is similar to what one would experience when a person in real world is smiling in front of them. Experts believe that this is an optical illusion built into Mona Lisa painting.

Secret bridge – Only a single man-made object has been painted, a bridge on the right side of Mona Lisa. There are various theories about which bridge this actually is. Many experts believe it to be the Ponte Buriano bridge in Tuscany. However, some researchers believe that it is Bobbio Bridge over the Trebbia. This was destroyed during a flood in 1472.

Leonardo’s obsession – It is said that Leonardo was hugely obsessed with Mona Lisa painting. It is believed that he worked on the painting for several years. He used to carry it with him wherever he went. This obsession has resulted in theories that Mona Lisa painting could be hiding a great secret.

Was Mona Lisa pregnant? – Mona Lisa painting has also been studied from the perspective of the individual’s health. Doctors have identified various conditions linked to Mona Lisa such as high cholesterol diet, deafness, facial paralysis and syphilis. There are also suggestions that Mona Lisa could have been pregnant, as she has the look of contentment in her eyes. Dentists have also examined the painting and indicated bruxism, which is the compulsive habit of grinding one’s teeth.

Which Religion Has Highest Millionaires?

5 Tips for Women Starting Their Journey in Mountaineering

What Is Maintenance Cost Of Eiffel Tower?

Can Winters Cause Heart Attack?

A Complete Guide to Cleaning Your Diamond Jewellery at Home (2023)