Why Mars Is Called Red Planet?

Mars is a planet of great importance to us, as it could possibly be our next home. It’s the only planet that can be considered for building human settlements. It may not happen anytime soon, but it’s possible theoretically. It explains why there’s currently a race among nations to explore the Martian surface and its atmosphere.

If humans are ever to travel beyond the solar system, they will need to include Mars in their plans. Other planets beyond Mars don’t qualify, as they are either gas giants or completely frozen outposts. Mars itself is currently uninhabitable for humans. But it is expected that with modern techniques like terraforming, planets like Mars could be made habitable.

When it comes to Mars, many people refer to it as the Red planet. It makes us wonder how the planet got the name. For answers, we have to understand planet Mars in a bit more detail. 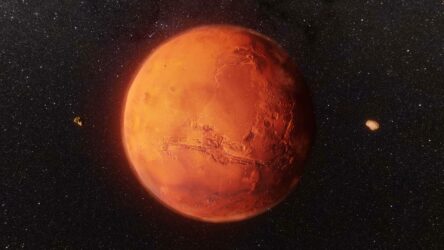 Why Mars is called red planet?

It is estimated that Mars may have been like Earth a long time back. Its terrain comprises canyons, polar ice caps and extinct volcanoes. It even has a thin atmosphere and different seasons. One of the most common features of Mars is that much of its surface is covered with red dust. Even the rocky surfaces have a reddish shade. It’s like the planet is covered in a layer of rust. And when winds blow, this red dust gets into the air as well. It makes the atmosphere also appear red.

Even if we look through a telescope, Mars will come across as mostly rusty in color. In earlier times also, civilizations had named it in a similar manner. For example, Egyptians called the planet ‘Her Desher’, which translates into ‘The Red One’. Chinese astronomers used to call it as ‘The Fire Star’. Romans and Greeks associated the planet with blood and named it after their respective God of War.

Mars is not the only planet to have a unique color. Most other planets in solar system have their distinctive color. For example, Mercury is grey, Venus is brown and grey and Earth is largely blue owing to its vast oceans. Talking about gas giants, Jupiter is brown, tan and orange, interspersed with white cloud strips. Saturn is golden, brown and blue-gray. Uranus is Blue-green whereas Neptune is Blue.

How each zodiac sign will love to impress their partners

House-on-Wheels: How does it save your money?

Countries that were invaded by the British apart from India

Where Are The Missing Nukes – A Disaster Waiting To Happen?