Industrialization has been an important aspect of human evolution. It has provided us with tools, equipment and products that have made life easier and lot more fulfilling. However, just like most other things, industrialization has its pitfalls too. For example, it has also resulted in widespread pollution and climate change. Another negative aspect is the numerous industrial accidents that occur every year. Some of these have led to colossal damages and hundreds of fatalities. Here’s a list of the world’s worst industrial disasters of all time. 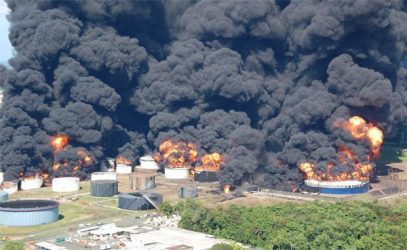 Benxihu Colliery explosion – This occurred in 1942 at Benxihu Colliery, which was operated by Japan at that time. The explosion was caused by a mixture of gas and coal-dust. The flames had incinerated most of the workers that were inside the mine. Initially, there were efforts to suppress the matter. Official deaths were reported at 34. However, later it was found that at least 1,549 workers had died in the explosion.

Halifax Explosion – This incident occurred in 1917 in Halifax, Nova Scotia, Canada. A collision between two ships, one of which was loaded with explosives, had led to the accident. The explosion was quite huge, estimated to be equivalent of exploding around 2.9 kilotons of TNT. The explosion resulted in deaths of around 2,000 people. Fatalities were caused by the blast, resulting fire, flying debris and collapsed building.

Bhopal disaster – This incident occurred in 1984 at a pesticide plant in Bhopal, India. The plant was operated by Union Carbide India Limited (UCIL). The accident is said to have occurred due to improper maintenance activities at the plant. It led to the release of highly toxic methyl isocyanate (MIC) gas, which quickly spread to nearby towns. It is estimated that around 8,000 people died within two weeks of exposure. Several more died later due to diseases caused by exposure to the toxic gas.

Chernobyl disaster – This is probably the most widely covered industrial accidents in history. It is considered as the worst nuclear disaster, both in terms of cost and fatalities. The accident had occurred in 1986 at one of the nuclear reactors at Chernobyl Nuclear Power Plant. The Chernobyl disaster caused widespread radioactive contamination across USSR and Western Europe. Globally, the fatalities related to Chernobyl disaster is estimated to be in the range of 9,000 to 16,000 deaths.

Banqiao Dam failure – This incident occurred in Henan, China in 1975. It happened when the Banqiao Dam collapsed, which further affected 61 other dams in the area. It led to major flooding, which is considered as the third worst flooding in history. More than 10 million people were affected by the flooding. Multiple factors had contributed to the dam’s collapse including depleted forest cover in nearby areas, typhoon Nina, lack of proper communication and sedimentation blockage. Although the official death toll is 26,000, estimates are much higher at around 240,000 deaths.

How to Use Infographics To Make Content More Interesting?

How To Increase Followers On Social Media?

What To Do If You See A Girl Being Harassed?

Where Can You Buy Drugs Legally?